Get Common Cause Updates

Get breaking news and updates from Common Cause.

Join the thousands across the country who instantly rally when there is a threat to our democracy.

Join the thousands across the country who instantly rally when there is a threat to our democracy.

Make a contribution to support Common Cause today.

Jump to common cause national

The COVID-19 pandemic did not have to be so catastrophic in the United States. The effects of the pandemic did not need to fall disproportionately on communities of color. These outcomes are the largely predictable consequences of political decisions and actions. Preventing such consequences in future national disasters requires us to act now.

On January 3, 2020, a Chinese official informed U.S. Centers for Disease Control and Prevention (CDC) Director Robert Redfield of the outbreak of a respiratory illness in China. Redfield relayed this information up the chain of command to the Department of Health and Human Services (HHS) Secretary Alex Azar who, in turn, informed the White House National Security Council. Thus began the Trump administration’s mishandling of the coronavirus disease 2019 (COVID-19) pandemic—with devastating consequences.

In early January, intelligence officials began “offering ominous, classified warnings about the virus to Trump in the President’s Daily Brief,” and the warnings continued into February. Yet President Donald Trump consistently downplayed the severity of COVID-19, claiming on February 24, for example, that the “coronavirus is very much under control in the USA…. Stock Market starting to look very good to me!” One day later, the director of the National Center for Immunization and Respiratory Diseases, Nancy Messonnier, warned the public of the inevitable spread of the virus: “We need to be preparing for significant disruption in our lives.” Trump’s response? He complained that Messonnier’s comments were spooking the stock market.

President Trump infamously predicted on February 26 that “within a couple of days” the number of cases in the United States would be “down close to zero” and congratulated himself on doing “a pretty good job” controlling the virus. With U.S. deaths from the virus exceeding 145,000 and U.S. infections surpassing 4.1 million by late-July, and the pandemic growing worse both domestically and internationally, the damage from Trump’s incompetent response to COVID-19 becomes more apparent each day.

One consistent thread in President Trump’s response to the pandemic has been the prioritization of his own political interests over public health. Perhaps nothing better illustrates Trump’s selfishness than his refusal to wear a mask. Despite the fact that the CDC advised in early April that everyone should wear masks in public to prevent the spread of COVID-19, for months, Trump refused to wear one and politicized the issue by speculating that people were wearing masks not as a preventive measure but as a way to signal disapproval of him. Trump donned a mask in public for the first time on July 11 during a visit to Walter Reed National Military Medical Center. Similarly, despite public health officials unanimously endorsing the need for widespread COVID-19 testing to contain the spread of the virus, Trump blamed testing itself for the rapidly rising number of COVID-19 cases and stated at a campaign rally that he told officials to “slow the testing down, please.” With COVID-19 infections surging to record high numbers and President Trump’s approval ratings plummeting, in mid-July, his administration began interfering in the CDC’s ability to collect data regarding the pandemic and make it available to the public.

The suffering and death caused by the COVID-19 pandemic, exacerbated by the Trump administration’s failed response, has hit Black, Indigenous, Latinx, and Asian communities disproportionately hard—bringing into broad public view the systemic institutional racism that permeates our nation. Black people are dying from the COVID-19 virus at a rate of 2.5 times higher than white people. Racial disparities in the impact of COVID-19 are the predictable “result of pre-pandemic realities,” “a legacy of structural discrimination that has limited access to health and wealth for people of color,” explained Dr. Marcella Nunez-Smith, director of the Equity Research and Innovation Center at the Yale School of Medicine. Black Americans are more likely to work in industries hit hardest by pandemic layoffs (e.g., restaurants and hospitality), and those who have kept their jobs are “more likely to work in hands-on, front-line work that puts them at continual risk of exposure in grocery stores, public transportation, trucking, warehousing and health care.”

Not only has President Trump failed, in a general sense, to lead our federal government in an effective response to the pandemic, but he has also taken concrete steps that have undermined our democracy at this critical time. This report focuses on President Trump’s pandemic response failures that have directly affected Common Cause program areas: transparency, accountability, voting rights, census, mass incarceration, press freedom, and more. We leave to other experts an accounting of Trump’s performance with respect to public health and other important policy areas beyond Common Cause’s expertise.

President Trump has weakened our governmental institutions, resulting in disastrous consequences during this pandemic. We must strengthen and repair these institutions. This report concludes with a section focused on things Americans can do now and in the coming months and years to make our country more resilient against President Trump and authoritarians like him—things we can do to make democracy work for everyone. 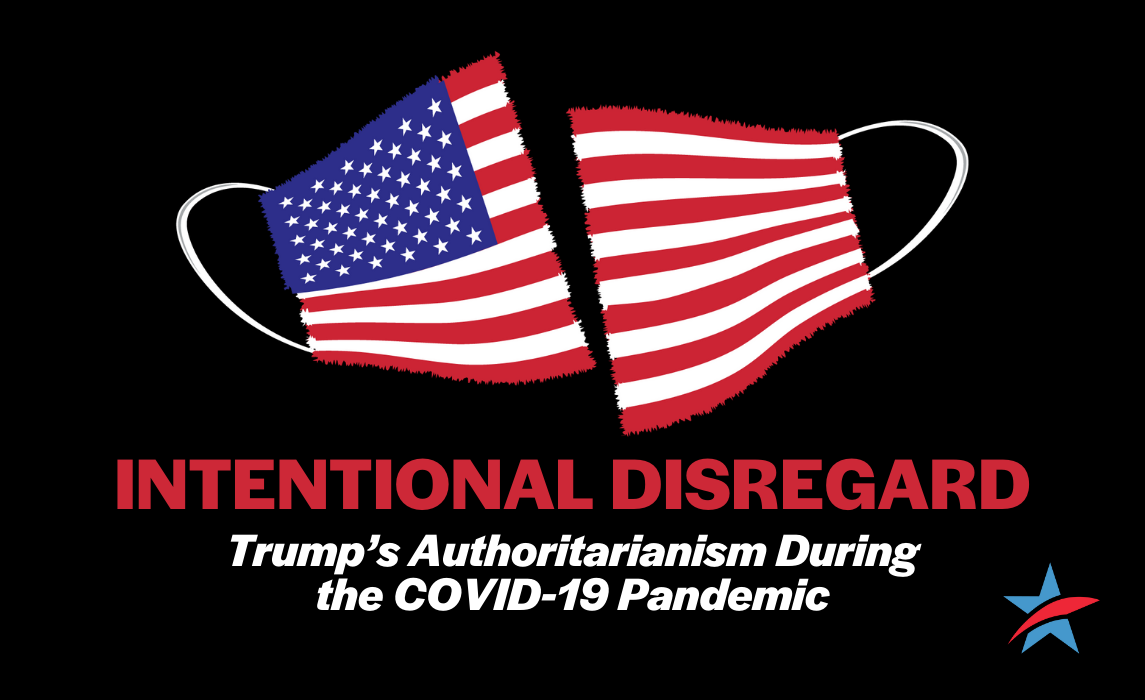 Join the movement over 1 million strong for democracy

Demand a democracy that works for us. Sign up for breaking new and updates.

We are challenging President Trump’s Executive Order to exclude undocumented people from being counted in congressional district apportionment.