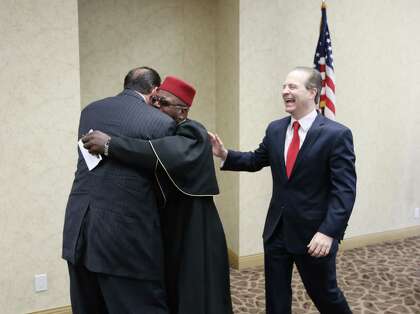 A personal question today: How do you feel about public restrooms?

Do you see them as useful facilities whose benefits far outweigh the occasional untidiness?

Or, are you so disgusted by public restrooms that you avoid them at all costs, entering only in the case of an emergency, and then, only with pinched nose and value-sized pump of anti-bacterial lotion?

Your answer may reveal something about your politics, according to Jonathan Haidt, a moral psychologist at New York University's Stern School of Business. The more grossed out you are by public restrooms, the more conservative you are likely to be - and vice versa.

This is why bathrooms are the perfect tool for social conservatives trying to defeat Houston's equal rights ordinance. By the looks of the group's website, it might be the only tool.

Critics, organizing under the name "Campaign for Houston," are insinuating that the new ordinance would make conditions even more disgusting - perhaps even dangerous - by allowing men to use women's facilities.

The so-called HERO ordinance, which will appear on the November ballot, really has little to do with potty time. It's about protecting people against discrimination in employment, housing and other sectors. It protects gay and transgender people, but also bans discrimination based on sex, race, color, ethnicity, national origin, age, religion, disability, pregnancy and genetic information, as well as family, marital or military status. So why are we talking about bathrooms? Because one small aspect of it would let transgender people use the bathroom of their choice.

That means a transgender woman who may wear dresses and makeup can use the women's restroom, rather than turning heads at the urinals. A transgender man who may sport lumberjack attire and a burly beard can use the men's restroom. It's really quite simple. It's about reducing drama, not creating it. As one transgender activist explains in a popular Twitter hashtag, #wejustneedtopee.

This simple accommodation has become the bogeyman's best weapon. Critics suggest it will lead to men dressing up as women to assault women and girls in bathrooms.

For critics such as former Harris County Republican Party chairman Jared Woodfill, the claim is just rough-and-tumble politics. It's a way to defeat an ordinance that partially benefits a group of people whose lifestyle they don't support. The claims might even be comical except for the fact that people believe them.

An ad set to air for two weeks on several local stations - including Mix 96.5, Sunny 99.1, KNTH AM 1070 and the conservative KSEV Radio - attempts to exploit that fear and disgust.

An unidentified woman claims she's afraid to have a baby in Houston because the ordinance lets men use women's restrooms.

"That is filthy, that is disgusting, and that is unsafe," the woman says.

She goes on to say she speaks for all moms. Yet, she acknowledges she isn't a mom. She isn't even pregnant. She simply hopes "one day" to have a kid.

Sorry, sister. You don't speak for me. I don't find solidarity in your ignorance.

As Richard Carlbom with the pro-ordinance Houston Unites campaign told the Chronicle: "Nothing in the equal rights ordinance changes the fact that it is - and always will be - illegal to enter a restroom to harm or harass other people."

If this ordinance posed a real danger, opponents wouldn't have to find some future parent to feign fear of becoming a victim "one day." They could surely find a real victim in one of the other cities that passed anti-discrimination ordinances decades ago.

Last year, the nonprofit, progressive website Media Matters tried to find them. It surveyed more than a dozen jurisdictions with equal rights ordinances, asking officials from states as diverse as Iowa, Hawaii, Maine and New Mexico for any evidence of the kind of abuse or assaults that the critics in Houston are predicting.

The officials reported none.

For those of you who don't trust Media Matters' research, I contacted several officials myself, and they verified their positions. One of them was John Elder, a Minneapolis police spokesman whose state of Minnesota began prohibiting discrimination against transgender people more than 20 years ago.

Elder said sexual assaults stemming from the 1993 law were "not even remotely" a problem, and that a police department inquiry found "nothing" in the way of such crimes in the city.

Don't buy into an urban myth

In 1997, the city of Cambridge became one of the first jurisdictions in Massachusetts to amend its human rights ordinance to include gender identity and expression, police spokesman Jeremy Warnick said Tuesday.

He sent me the full testimony of police Superintendent Christopher Burke before the state House in 2011, advocating for a statewide bill for transgender equal rights.

Burke, speaking "as a member of the law enforcement community, husband, father and citizen," testified that the bill would not harm women and children. He said there had been no incidents or issues regarding people abusing the Cambridge ordinance.

Massachusetts passed the law. Houstonians should do the same.

Even if you insist on voting against it, pick another reason. Maybe you don't want to condone a transgender lifestyle. Maybe you believe protections for some groups are already extended by federal law, and you don't want a local ordinance that could offer relief more quickly and less expensively for your fellow Houstonians.

But don't vote against the ordinance because of urban myths about sexual predators in bathrooms. Sexual predators exist. But if they wanted to attack you in a public bathroom, they wouldn't need a city ordinance to do it.

Top of the News